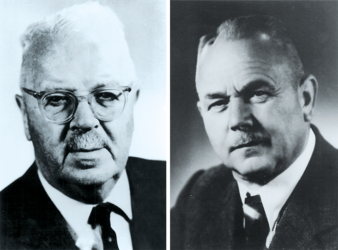 Foundation of the company by Karl Spohn and David Burkhardt at the current location in Blaubeuren Mauergasse 5.

The family business began, initially with 2 employees, with the repair of electrical machines and switchgears. At the same time, the development of own starting devices and switchgear began. 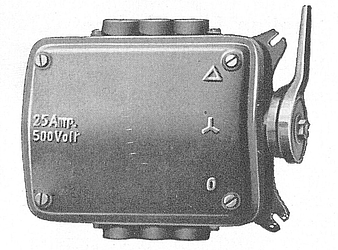 Until 1930, the number of employees grew to 30. Products such as the star-delta switch and starters expanded the product range. 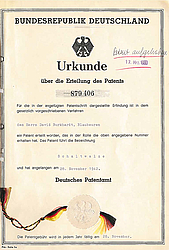 In November 1942, Spohn + Burkhardt applied for its first patent: The drum switch. 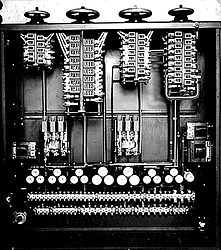 From 1948, construction of complete control cabinets for the control of cranes.

At the end of the 40s, the number of employees grew to 100. Machines such as lathes and presses were purchased and the production facilities gradually expanded.

The clientele, which originally consisted of local customers, expanded to include industrial companies and power stations. A further boost came with participation in trade fairs. First with the presentation of the products at the Leipzig Fair and then at the Hannover Fair. 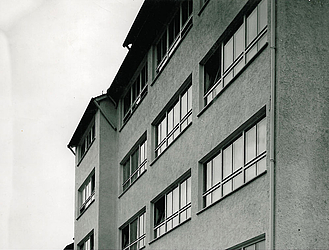 Until 1955, SPOBU expanded in the Mauergasse, near the famous Blautopf, to its present size. The last construction phase was the 7-storey high-rise building with technical and commercial offices, as well as additional production areas on the lower floors. 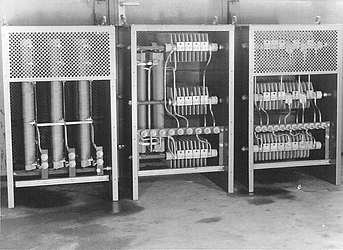 From 1960, Spohn + Burkhardt manufactured cast resistors for cranes and industrial applications. The resistors product portfolio was later expanded to include wire wound and steel grid resistors. 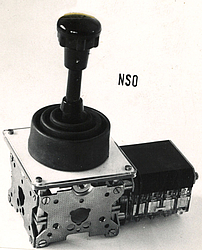 From 1963, the product range was expanded to include single and dual axis control switches which were the forerunners of today‘s VNS0. They enabled the changeover from direct switching to contactor control and a simpler and more ergonomic operation of machines. 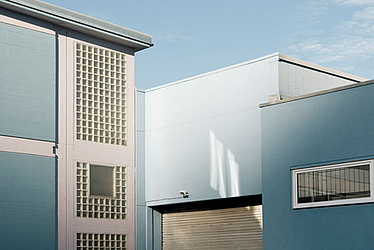 In 1964, the second plant was built in neighbouring Schelklingen. Initially, only sheet metal processing was located there. Later, control stations and portable consoles for Liebherr were built on there. The Schelklingen plant was gradually enlarged by the addition of further halls, and departments from the main plant in Blaubeuren (paint shop, starter construction and resistor construction, ...) were relocated to Schelklingen.

The CS0 master switch expanded the product portfolio in 1974. 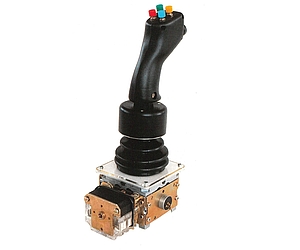 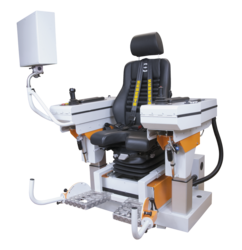 A new generation of control stations, the FSMMD, sets new standards with its many electrical adjustment options.

Together with an ergonomically shaped seat and memory function, it is ideally suited for demanding multi-shift operations and for the first time offers the possibility of seated or standing operation of cranes. 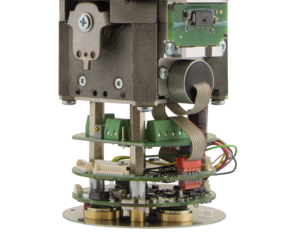 At the beginning of the 2000s, the first master switches were equipped with bus systems. Via the so-called bus line, all functions of the joystick can be transmitted together, thus simplifying the connection to the subsequent machine control. 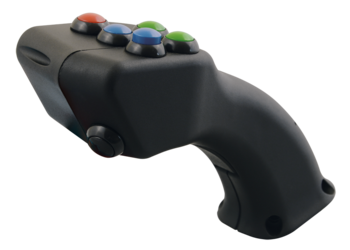 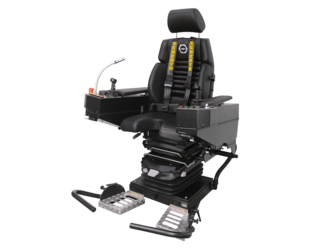 Especially for harbour cranes, it offers an ergonomically adaptable workplace for relaxed and fatigue-free working. A free view downwards as well as working in forward position are possible due to its many degrees of freedom. 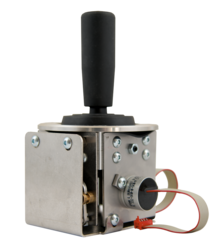 The JMS3 joystick for smooth, sensitive and precise control. The base for this is its metal body and the high quality bearings, as well as oil-damped dampers. 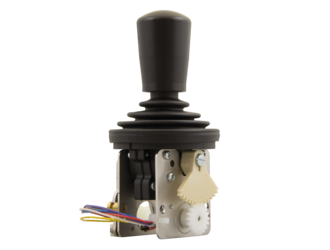 Extreme environmental conditions require resistant joysticks. The ST4 guarantees tightness and functionality even with a damaged rubber boot and thus withstands adverse weather such as snow and ice. 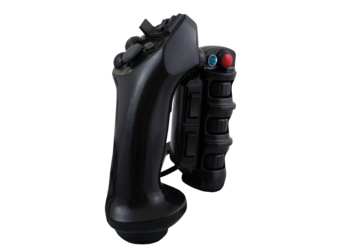 For the company Pistenbully, a customised handle, produced in 3D printing, was projected with a variety of internals. 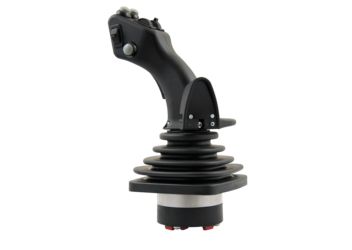 Especially for applications with different bus systems, the new HS2. Thanks to the wear-free 3D Hall sensor system with 10 million switching cycles. 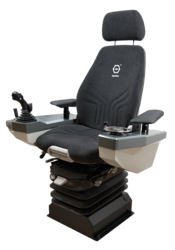 3D printing is also making its way into control stations. The FS with I consoles (I for innovation) offers console covers made of plastic using the 3D printing process. This makes it possible to also offer small series with customised plastic covers. 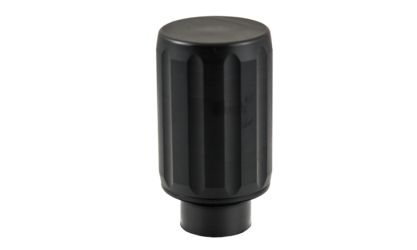 The compact G50 handle adds another axis to the control functions of the joystick. 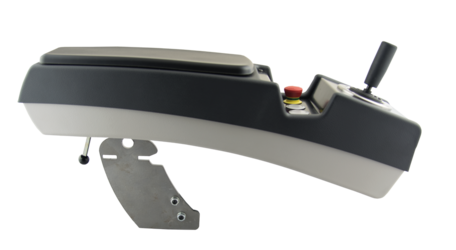 A new multifunctional armrest MFA for new fields of application such as agricultural and municipal vehicles or forklifts.

Also in 2017, the first subsidiaries of Spohn and Burkhardt were founded. Spohn & Burkhardt India Pvt. Ltd. in Bangalore and EFD Elektrotechnische Fabrik Düsseldorf GmbH, which manufactures maintenance and safety switches for industrial sectors under the brand name SiTec.

The HS0, the little brother of the HS2, completes the series of 3D-HALL based joysticks. With its small size, it can be used in applications where limited installation space and robustness are important at the same time. 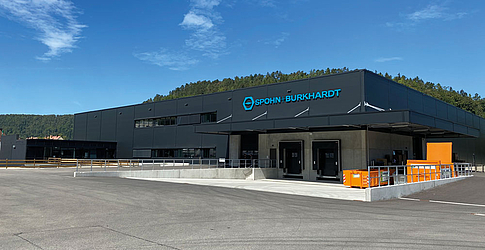 At the end of 2019, at the beginning of 2020, production began to move to the new assembly hall in Württembergerstrasse. New and modern production lines were planned and implemented here on around 5000 m2. Around 100 employees work here with recognized Spobu quality. 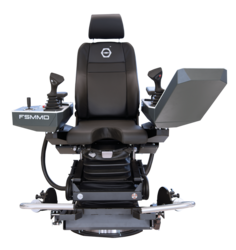 Functionality meets design and ergonomics. This sentence is probably the best way to describe the new edition of the FSMMD control station and the new development of the RCD control station. With its numerous electrical adjustment options and the memory function, the FSMMD is perfectly suited for demanding shift work. 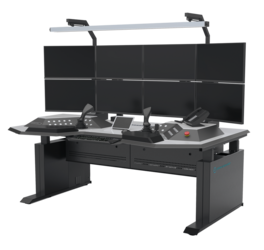 The Remote Control Desk, or RCD for short, eliminates the need for long journeys to the crane and allows safe and comfortable working from a sitting or standing position.

By joining KML GmbH in Lahr, a manufacturer of cabins, Spohn & Burkhardt becomes a system supplier. 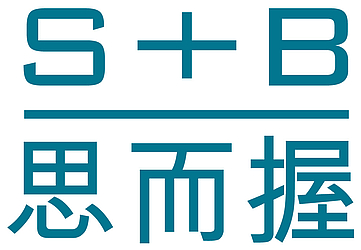 On 01.07.2021, the third subsidiary of Spohn und Burkhardt was established with the foundation of S+B Shanghai Co, Ltd.

The company was founded in 1920 in Blaubeuren by engineers Karl Spohn and David Burkhardt and it is still family-owned. Initially, the company repaired motors and switch gears with two technicians. During this period, the company began development of its own switchgears.

By 1930, Spohn + Burkhardt had 30 employees and had started production of larger devices, such as star-delta switches. Automatic switchgears were also incorporated into the production program.

Spohn + Burkhardt filed its first patent in 1942: the switch roller.

Due to the high demand for the company's products, the building in Blaubeuren was expanded in 1955 and renovated to provide more room for the employees.

In 1964, construction of the second factory in nearby Schelklingen was completed. Initially, only metalworking took place there. The Schelklingen factory was successively expanded with construction of additional halls in order to relocate the control station and resistor departments and paint shop.

1965 – The NS0 joystick, a 2-axis joystick that could be operated with a single lever, unlike earlier control wheels was introduced. With the versatile modular system, the NS0 became an all-rounder, because it could be used for nearly every application.

One of the first Spohn + Burkhardt crane control stations was a combination of control unit and seat.

1984 – The product assortment was expanded with the development of various universal handles. Integration of a variety of different push-buttons and controls made it possible to control several functions with the joystick.

1999 – The ergonomically designed FSMMD control stand offered and continues to offer numerous functions that are very useful in multi-shift operation, in particular. It was now possible to adjust all functions electrically. It also had a "memory function" that made it possible to save specific settings.

2002 – The introduction of BUS systems assured simpler wiring with a clearer arrangement, because everything can be controlled via a plug connector.

2004 – With its narrow and wide handle half-shells, the UGA offers a wide variety of combination possibilities and functions. Therefore, it is now possible for the customer to equip their individual handle with a variety of components.

2006 – The FSRD is a universal control station for the hoist sector and industry sector. It has hydraulic and gas strut cushioning.

2010 – The FSRHDG was introduced to the market. This control stand is optimal for work in production. The high degree of freedom in adjustment possibilities and the outstanding ergonomics assure relaxed work without fatigue.

2012 – All-metal joystick manufactured with the highest precision, the JMS3. An aluminum base element is assembled with a positive-locking fit on the modular stainless steel and brass parts. Gentle and precise control is achieved with a solid brass gear and special oil-damped rotation dampers.

2014 – The ST4 was specially designed for wind and weather, snow and ice. It guarantees a tight seal and functionality even if the rubber gaiter is defective.

2015 – The HS2 was developed particularly for applications with all different bus systems. The non-wearing 3D hall sensor system enables a control system with up to 5 million switching cycles.

The FS innovation offers countless possibilities. Now customer-specific panels can be made in plastic with 3D printing.

2016 – The compact G50 handle expanded the control functions of a joystick with an additional axis. Rotating the spring-centered handle counterclockwise or clockwise generates a potentiometric output signal that can be used together with the direction rails integrated in the potentiometer for the various control tasks.

Today – Even if the functionality of our new 4-axis joystick or the multifunction armrest remain top priorities, the design of the products is becoming increasingly important.

Do you have any questions?